Recent weeks have seen economies around the world record a jump in their respective inflation indices, as the brakes on commerce caused by lockdowns have eased. For the UK, the CPI inflation 12-month growth rate increased from 0.7% in March to 1.5% in April, which is noteworthy but well below the Bank of England’s 2% target. However, other nations have seen sharper increases, and that the USA (the world’s largest national economy) is one of those countries has made inflation a hot topic of debate. For the US, CPI inflation reached 4.2% in April, up from 2.7% in March.

The debate has been fanned by a widespread expectation that there is further upwards pressure on inflation to come. Oil markets are of the opinion that much of the supply glut that developed during the darkest hours of the pandemic has now eroded, and inevitably a re-opening global economy is going to demand more energy in the coming months. Brent crude oil is currently trading around the $70 a barrel mark, nearly double the price seen a year ago. PMI indices from around the globe confirm rising business activity across sectors, creating competition for resources.

For property, this will have implications. Assets with index linked rents will become sought after, a welcome development for retail property where linkers are more common. We see this favouring grocery / supermarket assets, which have been the more resilient part of the sector. The burst of commodities inflation could also dampen development activity, which will help reduce supply further down the line in industrial and office occupier markets.

Yet, among economists there is a widespread view that this current burst of inflation is driven temporary factors that will eventually blow over. The consensus forecast for UK CPI inflation in 2021 is 1.6%, rising to 2.0% in 2022, so easily in line with the existing Bank of England inflation target. The restarting of economies this Spring has caused dislocations in global trade, ranging from shipping containers being in the wrong part of the world to shortages of semi-conductors. These issues will correct themselves as the return to normal continues.

The recent spurt in inflation in part also relates the fact that when measuring inflation we are currently comparing back to the spring of 2020, during the height of the first wave of Covid. At that time, pricing in some markets had effectively collapsed (air travel, for instance), so benchmarking with a current situation where there is some market to talk of creates a skewed impression.

Also, economists tend to worry less about inflation driven by fluctuations in commodity prices, which usually drop out of the figures after a year or can be reversed by price fluctuations. If we look at core inflation (which strips out volatile prices, like energy and food) the increase has been far more muted – up from 1.1% in March to 1.3% in April. This points to underlying inflation increasing at a more subdued pace. 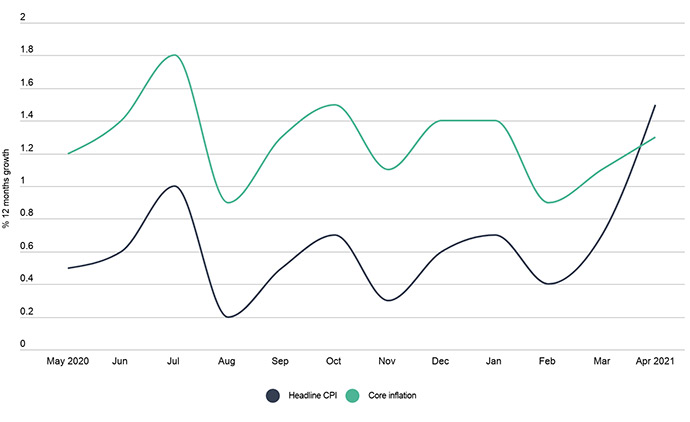 What will cause more concern among economists are signs that inflation is being driven by persistent high wage growth – so, too much money chasing too few goods. The most recent figures from ONS do show a jump in pay rises in recent months to 3.1% in the year to March 2021, which is the highest level since 2007.

However, the wages figures might be skewed by the reopening of the economy to the backdrop of a labour market distorted by the pandemic. For instance, some unemployed people may have put their job search on hold until they are vaccinated, creating a bottleneck of applicants for jobs. While some press articles talk of labour shortages, it is worth remembering many businesses have the pool of 3.4 million workers on furlough (or 10.5% of the workforce) to draw upon as they reopen, plus the 1.6 million unemployed. Moreover, it remains to be seen whether the recent increase in pay growth becomes embedded, rather than proving to be a blip.

We should also be mindful of some of the disinflationary pressures that will provide some counterbalance. As the government removes pandemic financial support from businesses, we will see zombie companies go under. For retail, where we have probably seen a sea-change in shopping habits; which could mean more job losses and business failures ahead for the sector.

However, the recurring theme through this note is that inflation is picking up because the economy is reopening. Inflation in this case is a reflection of activity increasing and creating a fresh wave of demand to which prices much adapt. The message we are hearing from central banks is they are prepared (within reason) to allow inflation to run ahead to let the economy strengthen – as was the case in 2010 and 2011.

Inflation is rising – this is good news.

Get the full insight from our latest Economic and Property Market Review here.